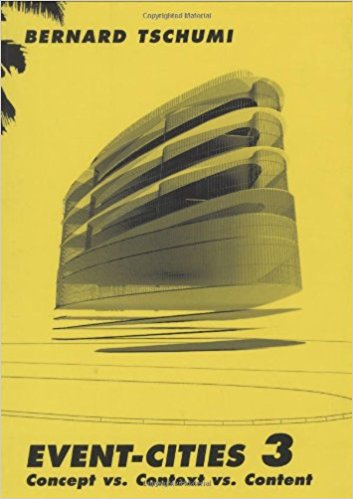 In Event-Cities 3, Bernard Tschumi explores the complex and productive triangulation of architectural concept, context, and content. There is no architecture without a concept, an overriding idea that gives coherence and identity to a building. But there is also no architecture without context -- historical, geographical, cultural -- or content (what happens inside). Concept, context, and content may be in unison or purposely discordant. Against the contextualist movement of the 1980s and 1990s, which called for architecture to blend in with its surroundings, Tschumi argues that buildings may or may not conform to their settings -- but that the decision should always be strategic.

Through documentation of recent projects -- including the new Acropolis Museum in Athens, a campus athletic center in Cincinnati, museums in Sao Paolo, New York, and Antwerp, concert halls in France, and a speculative urban project in Beijing -- Tschumi examines different ways that concept, context, and content relate to each other in his work. In the new Acropolis Museum, for example, Tschumi looks at the interaction of the concept -- a simple and precise museum with the clarity of ancient Greek buildings -- with the context (its location at the base of the Acropolis, 800 feet from the Parthenon) and the content, which incorporates archaeological excavations on the building site into the fabric of the museum. Through provocative examples, Tschumi demonstrates that the relationship of concept, context, and content may be one of indifference, reciprocity, or conflict -- all of which, he argues, are valid architectural approaches. Above all, he suggests that the activity of architecture is less about the making of forms than the investigation and materialization of concepts.