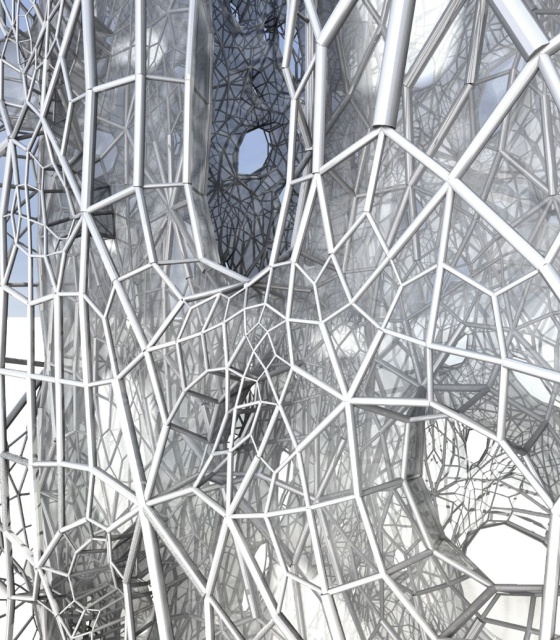 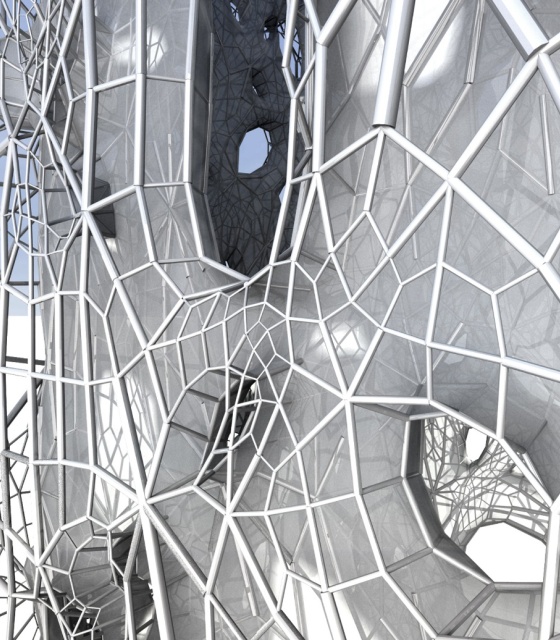 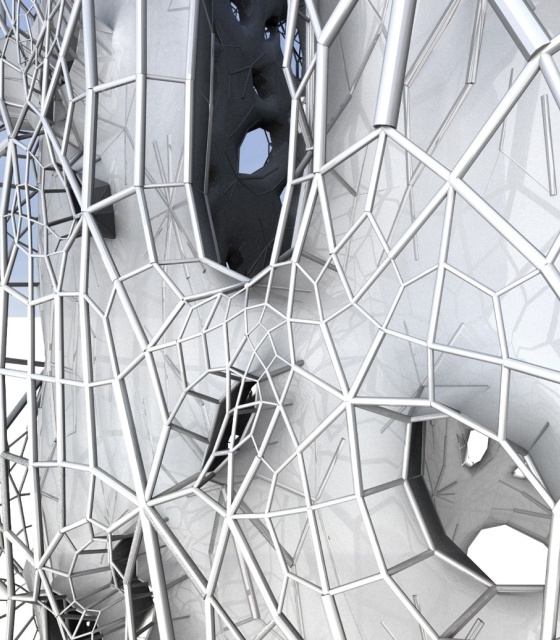 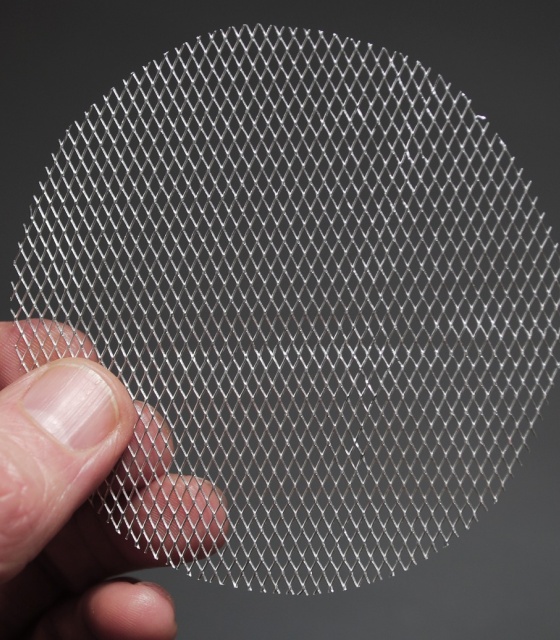 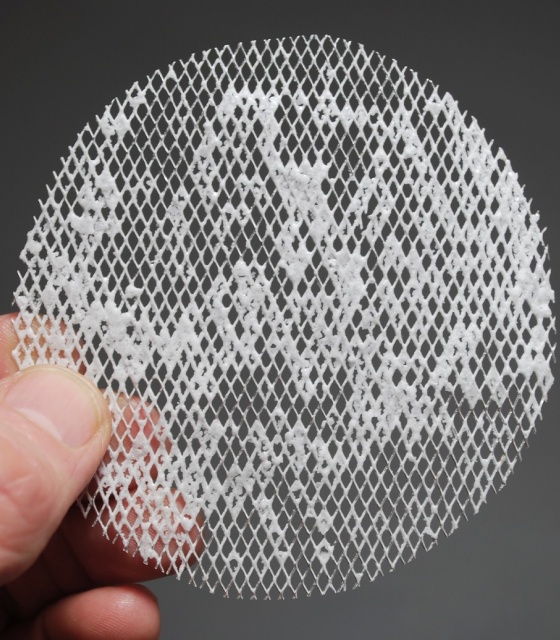 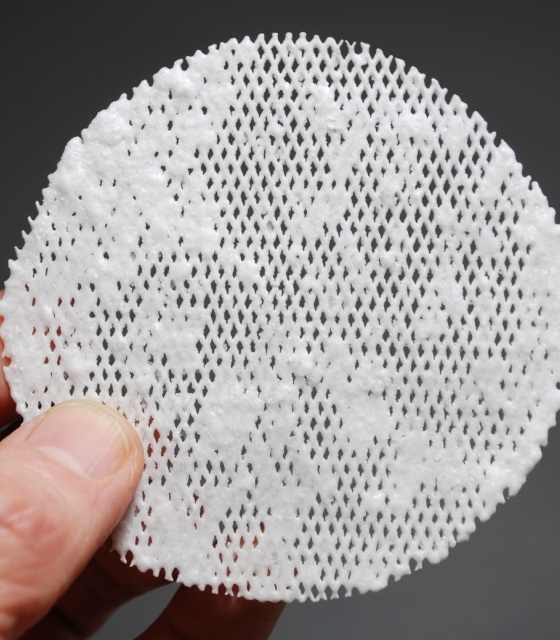 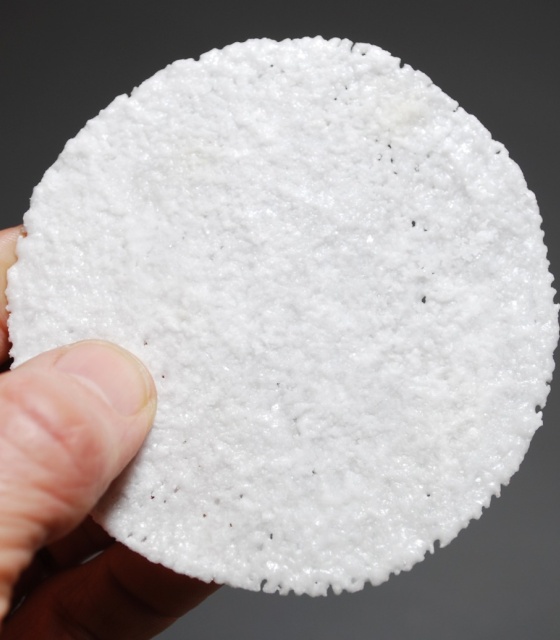 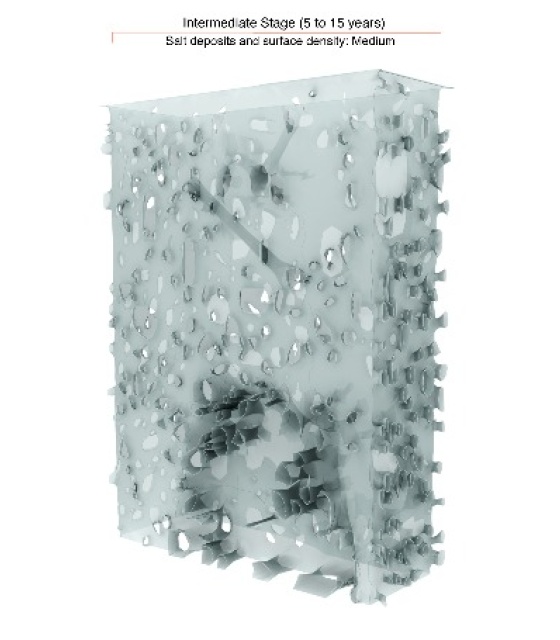 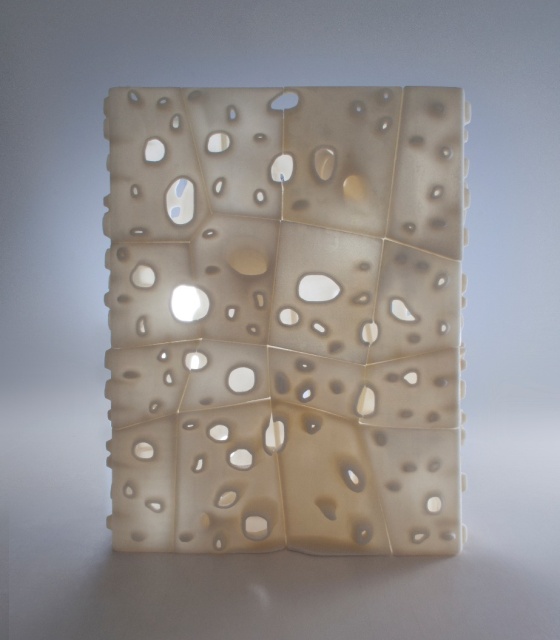 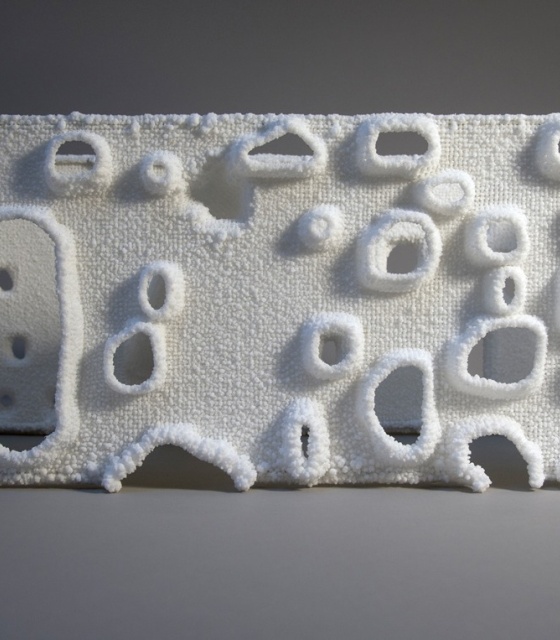 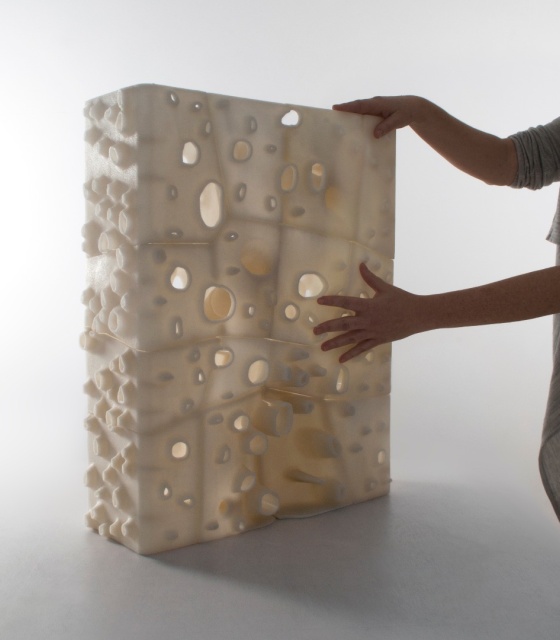 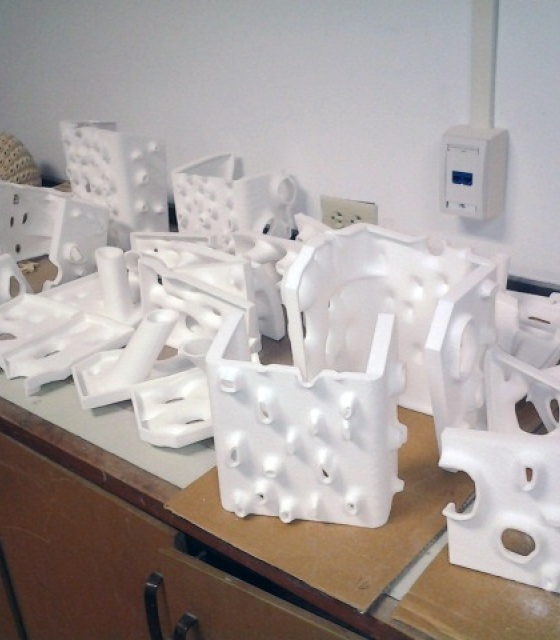 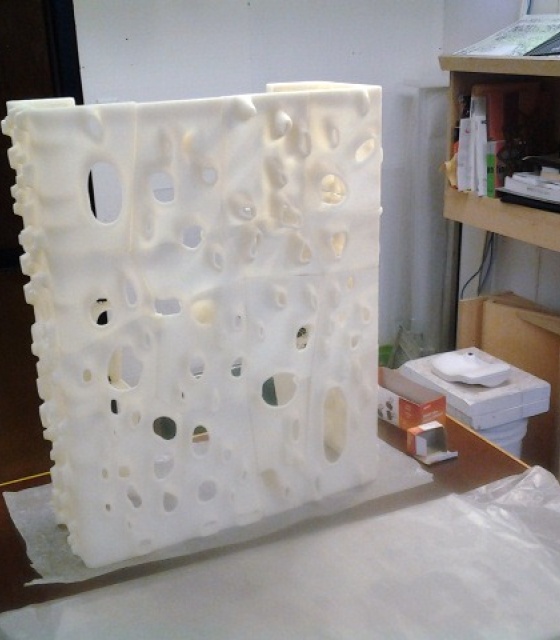 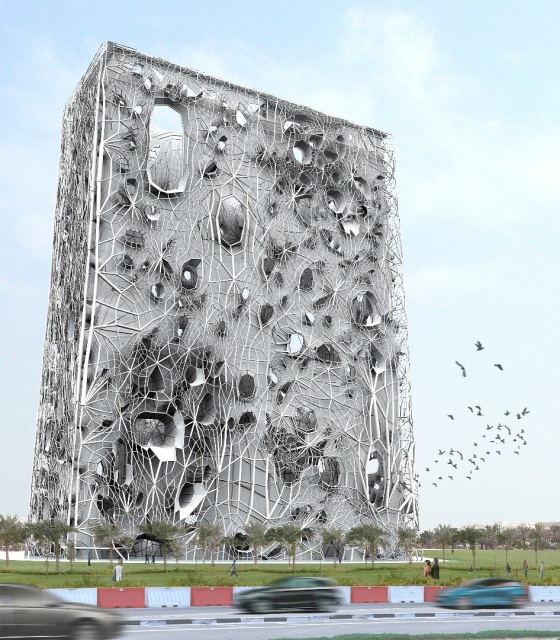 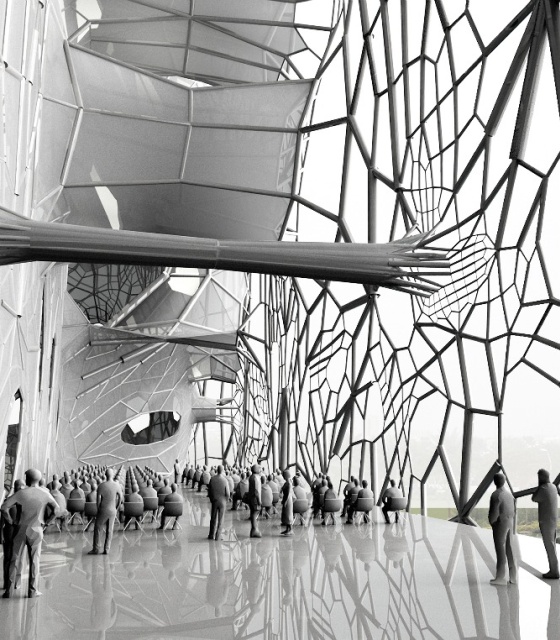 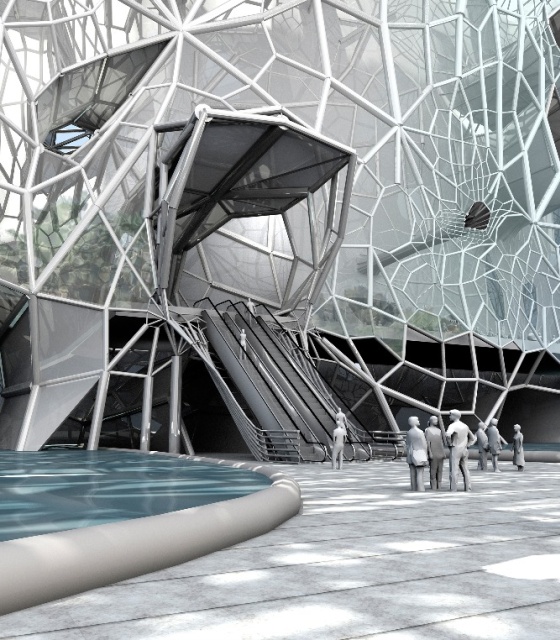 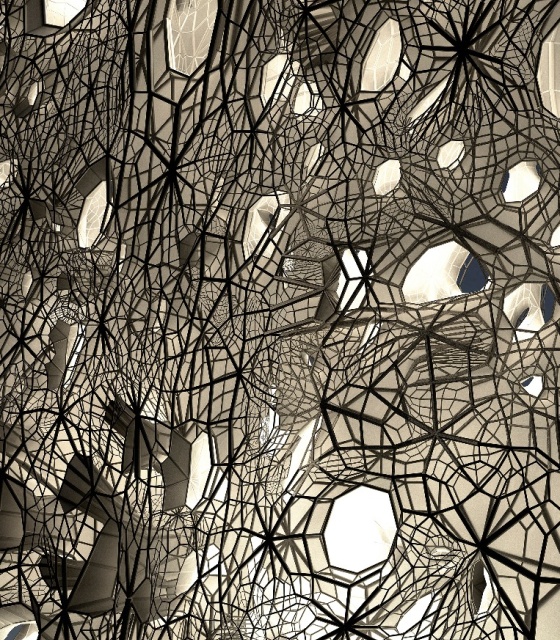 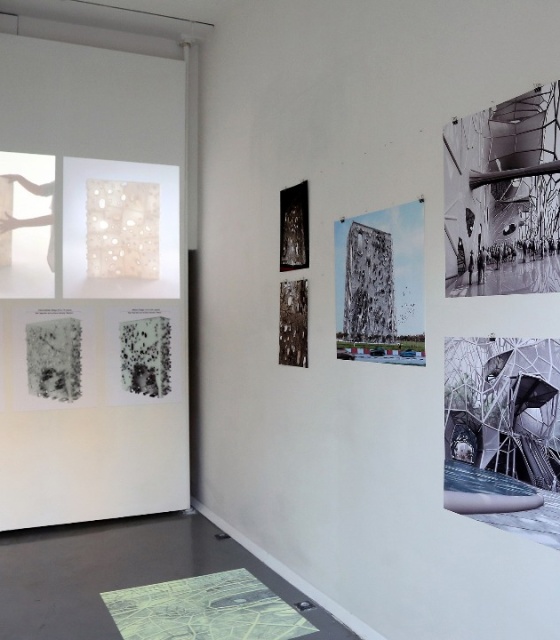 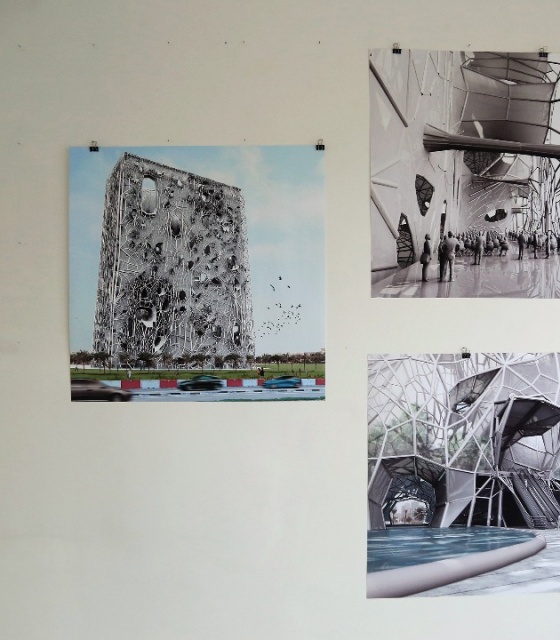 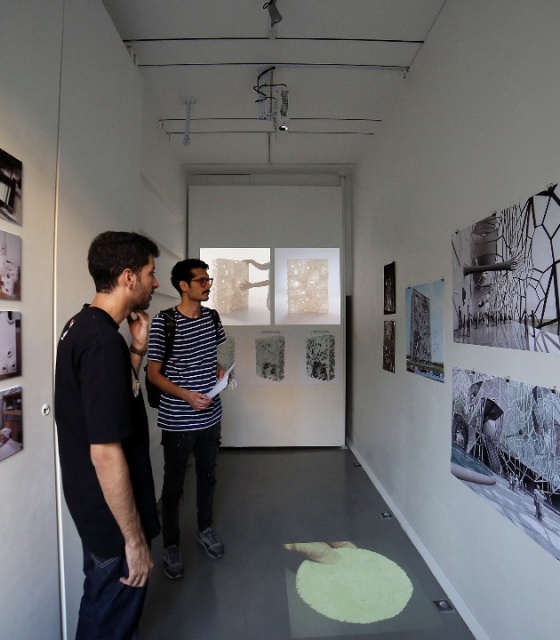 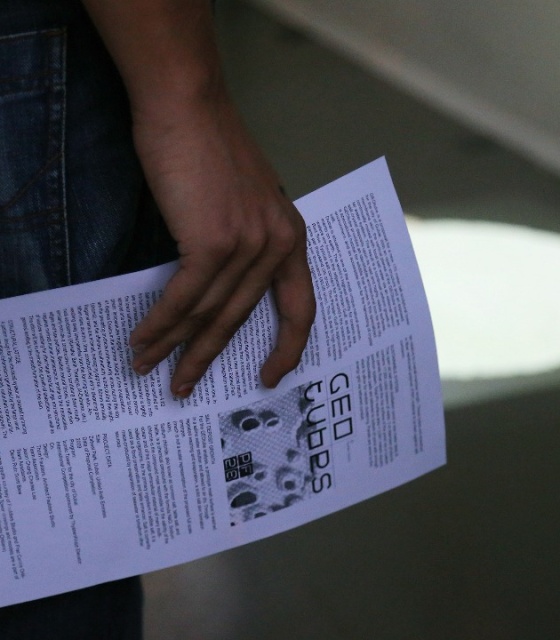 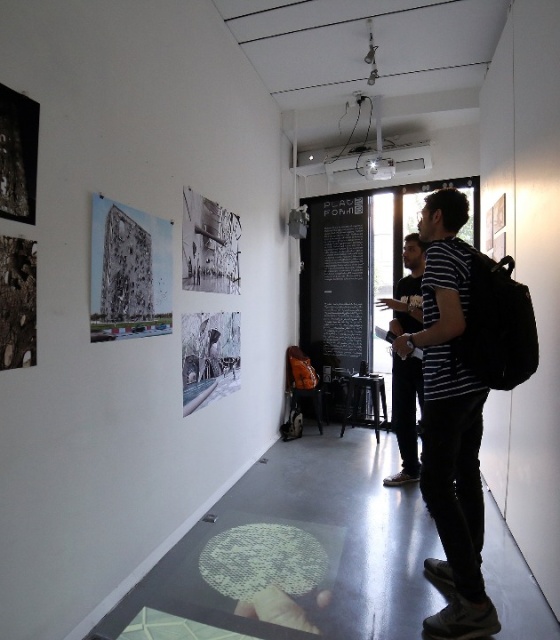 
GEOtube is a proposal for a new 170 meter tall sculptural tower for the city of Dubai. With an open structure and an exposed membrane skin, the vertical planes of the GEOtube tower are continually misted with local salt water via an external vascular water system. The result is a continual uniform growth of salt crystal deposits upon its vast and highly visible surfaces. GEOtube provides an identifiable architectural icon for the city, a specialized habitat for wildlife that thrives is this specialized environment, and an accessible skin for the harvesting of crystal salt.

Dubai is situated in one of the most unique natural environments on earth. The world’s highest salinity for oceanic sea waters are found in the adjacent Persian Gulf, as well as the Red Sea. Typical salt content for the world’s the oceans is 35 parts per thousand (35 o/oo). The Persian Gulf is approximately 40 parts per thousand (40.00 o/oo). This is due to high evaporation rates in the region from high temperatures and low fresh water influx.

Dubai’s regional coastal plains, known as sabkahs, are geological formations of salt flats created by the presence of extreme temperature and humidity, combined with high water salinity. The extreme climate variations with thermal contraction at night and expansion during the day leads to polygonal surface cracking. Deposits of primarily halite, gypsum, and aragonite form some of the major subsurface hydrocarbon reservoirs in the Middle East.

GEOtube is a new kind of tower. Sprayed with adjacent Persion Gulf waters, its building skin is entirely grown rather than constructed; is in continual formation rather than fully completed; and is created locally rather than imported from afar. As the water evaporates and salt mineral deposits aggregate over time, the tower’s appearance transforms from a transparent veil to a vibrant white vertical plane. Becoming a new vertical natural habitat and harvesting surface, GEOtube extends Zabeel Park skyward, and broadcasts Dubai’s innovative integration with the natural environment globally.

Salt crystals produce air saturated with healthy negative ions. In contrast, pollution produces large quantities of positive ions creating an unhealthy electrical imbalance in the air. The concentration of negative ions is naturally higher around waterfalls and by the ocean; when water droplets are dispersed, an electrical charge is created. Research has proven the therapeutic values of salt caves and their positive influence in the treatment of respiratory diseases.

Salt water will be supplied to GEOtube Tower via a new 4.62 km buried pipeline. The incoming salt water will be distilled on site to increase saline levels and filtered prior to distribution onto the tower surfaces. As highly saturated saline seawater is lightly sprayed onto the skin mesh, the water evaporates with atmospheric temperatures ranging from24 degrees in winter to over 41 degrees Celsius in the summer. Aiding in the evaporation are the prevailing on-shore northwesterly winds during the day (shamal), and the offshore southeasterly winds during the night.

Regional rains are minimal, averaging approx. 80mm annually. When rains do arrive, they constructively aid in cleansing and washing away lose particles from the forming salt skin. Annual sandstorms (Al-Haffar, Barih Thorayya, Al-Dabaran, etc.) similarly provide a constructive role in scrubbing down rough edges and lose particles. Besides natural forces, the salt skin requires minimal human maintenance, similar to the necessities of window washing for other large size buildings and structures. The effort will be to eliminate the growth of stalactites, as well as general tending to the smooth formation of the skin.

STRUCTURAL LATTICE A pattern design for the structural system is created by tracing the planar surface deformation generated by the large wind tube openings. The result is a highly redundant structural lattice comprised of two layers per wall (one layer is shown). The layers are interconnected with lateral structural bracing via the wind tubes.

The structural lattice is made with steel tubes that vary in diameter relative to overall member length. These tubes are sheathed in fiber reinforced polymer (FRP) material to protect against salt corrosion.

Photovoltaic pads are tethered to bottom of pond with enough slack to allow for random clustering. Panels are wired to the energy grid via tethered conduit.

SALT DEPOSIT GROWTH For the GEOtube analysis, a prototype mesh surface is washed in a saline water solution and allowed to air dry. Through repeated washing and evaporation, a solid salt skin formation emerges. (mesh is not a scalar representation of the proposed full scale skin).

Sodium chloride, also known as common salt, table salt, and halite, is a chemical compound with the formula NaCl. Sodium chloride is the compound most responsible for the salinity of the ocean and of the major extracellular material of many multicelled organisms. As the primary ingredient in edible salt, it is used as a food preservative and taste enhancer. Salt is currently mass-produced by evaporation of seawater or brine from other sources.

Iconic Tower for the city of Dubai International Competition sponsored by ThyssenKrupp Elevator Co.

FauldersStudio collaborated with Emerging Objects/UC Berkeley (www.emergingobjects.com) to produce a scale model of the GEOtube Towerby Faulders Studio. Emerging Objects provided material development and production to fabricate the building skin replication entirely from 3d printed salt. Constructed through a series of interlocking printed components, the model is extremely translucent and is consistent with the proposed full-scale material properties.