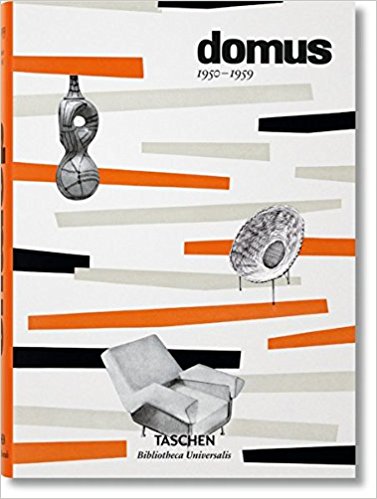 Hopeful modernism: The optimism and triumphs of the 1950s Founded in 1928 as a “living diary” by the great Milanese architect and designer Gio Ponti, domus has been hailed as the world’s most influential architecture and design journal. With style and rigor, it has reported on the major themes and stylistic movements in industrial, interior, product, and structural design. This fresh reprint of domus’ 1950s coverage brings together the most important features from an era of post-war optimism. As memories of conflict receded, architecture and design sought new forms, materials, and applications, as well as increasing international dialogue. Highlights include Le Corbusier’s design of the United Nations Building in New York; the Case Study Houses of Charles and Ray Eames; Richard Neutra in California and Oscar Niemeyer in Brazil, office machines by Olivetti, furniture by Ray and Charles Eames, ceramics and lights by Ettore Sottsass, and the Herman Miller Showroom by Alexander Girard in San Francisco. domus distilled

About the series:
Bibliotheca Universalis— Compact cultural companions celebrating the eclectic TASCHEN universe at an unbeatable, democratic price!
Since we started our work as cultural archaeologists in 1980, the name TASCHEN has become synonymous with accessible, open-minded publishing. Bibliotheca Universalis brings together nearly 100 of our all-time favorite titles in a neat new format so you can curate your own affordable library of art, anthropology, and aphrodisia.