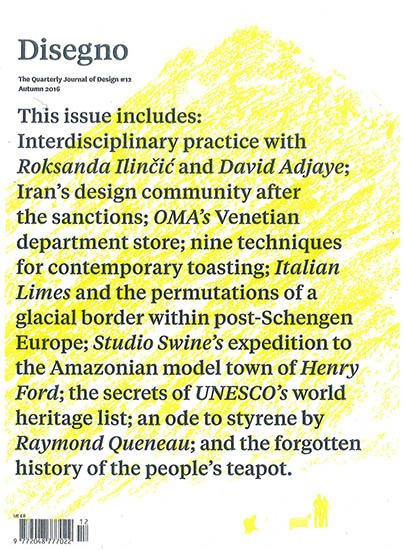 Disegno is delighted to announce that the latest issue of the magazine will launch on Monday 19 September. The launch of Disegno #12 coincides with the magazine's fifth birthday, that will be celebrated at a special event at 66 Leonard Street in Shoreditch, London.

Disegno #12 is designed by Disegno’s creative directors, Annahita Kamali and Florian Böhm of Studio AKFB, and features a series of reportages, essays, reviews and conversations.

Highlights in the issue include a photoessay on OMA’s Fondaco dei Tedeschi, Venice’s first department store; a conversation between Roksanda Ilinčić and David Adjaye on how their respective fields intersect; a travelogue from Tehran examining the city’s post-sanctions design community; an insider’s report on the UNESCO World Heritage List, illuminated by the case studies of Le Corbusier and Frank Lloyd Wright; and an ode to styrene written by Raymond Queneau.

To celebrate five years of Disegno, the magazine approached nine designers to participate in a special project that re-imagines the act of toasting for contemporary society. The resultant rituals blend function, symbolism, and social critique, and are featured in the pages of Disegno #12. Five experimental toasts will be performed on the launch night on 19 September.

Roksanda Ilinčić and David Adjaye on the connections between architecture and fashion; Beatriz Colomina and Mark Wigley reflecting on how to redesign the species for the Istanbul Design Biennale; an investigation of the UNESCO World Heritage List, as told through the divergent fates of Le Corbusier and Frank Lloyd Wright; a report on packaging designs for the future of e-commerce; the story of Italian Limes and its efforts to map borders in post-Schengen Europe; a gallery of the empty spaces of OMA’s Fondaco dei Tedeschi, Venice’s first department store; Iran’s design community explored through a travelogue about the country’s post-sanctions future; nine experimental strategies for raising a glass with Matali Crasset, Formafantasma and Emilie Baltz, among others; a celebration of 50 years of B&B Italia, filtered through Raymond Queneau’sindustrial styrene poetry; Studio Swine on the trail of Henry Ford in the Amazon rainforest; reflection on how to understand spaces through sound in Bernie Krause’s The Great Animal Orchestra; a review of Play:ground, New York’s new junk space for children; an essay on the Kindle Oasis and the development of e-readers; a discussion of how designs for power have failed in the aftermath of Brexit; a breakdown of the authorless design of the Brown Betty teapot; and Stefanie Tschirky’s material-led fashion design.