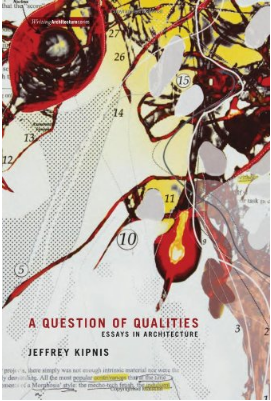 A Question Of Qualities: Essays In Architecture
August 2013
By Jeffrey Kipnis

Jeffrey Kipnis's writing, thinking, and teaching casts architecture as both an intellectual discourse and a lived, affective experience. His essays oncontemporary architects are less about making critical judgments than about explication, exegesis, and provocation. In these eleven essays, written between 1990 and 2008, he considers projects, concepts, and buildings by some of the most recognized architects working today, with special attention to the productions of affect. He explores "intuition" in the work of Morphosis, "exhilaration" in Coop Himmelb(l)au, "freedom" in the work of Rem Koolhaas and OMA, "magic" in Steven Holl's buildings, and "anxiety" in Rafael Moneo's writing about contemporary architecture.

Kipnis's deft integration of art, critical theory, philosophy, pop culture, classical music, and science -- what the volume's editor Alexander Maymind calls "ancillary material" -- into a rigorous architectural theory and criticism makes A Question of Qualities an exemplar of a new way to write about architecture. It is also a distinct pleasure to read. Kipnis transcends the fractious intellectual climate in architecture, stepping outside the boundaries mandated by the vast specialized criteria that the discipline now claims to address. The essays in this volume demonstrate a style of writing that is not so much about architecture as it is an affect of architecture itself.