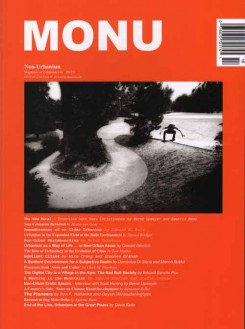 This issue explores the highly topical theme of ‘non-urbanism’, where city and countryside are not inherently opposed conditions but rather the result of each other. At least one author argues in favour of changing the “urban/non-urban dichotomy into a dynamic/stagnant version that is based on social rather than spatial conditions.” The gap is today also being bridged by increased digitalization, however, examples are given of non-urban spaces in places like India and China that are transforming independently of the influence of social media and the Internet, and hybrid spaces between city and countryside in Indonesia are investigated. A photo series of non-urban skateboarding highlights the fact that so-called urban activities still find place in non-urban environments.