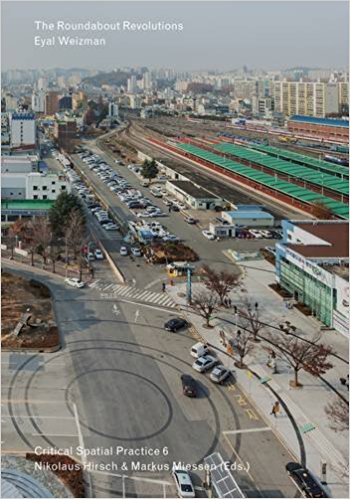 One common feature of the wave of recent revolutions and revolts around the world is not political but rather architectural: many erupted on inner-city roundabouts. In thinking about the relation between protest and urban form, Eyal Weizman starts with the May 1980 uprising in Gwangju, South Korea, the first of the roundabout revolutions, and traces its lineage to the Arab Spring and its hellish aftermath.

Rereading the history of the roundabout through the vortices of history that traverse it, the book follows the development of the roundabout in Europe and North America in the early twentieth century, to its subsequent export to the colonial world in the context of attempts to discipline and police the chaotic non-Western city. How did an urban apparatus put in the service of authoritarian power became the locus of its undoing?

Today, as the tide of revolt that characterized the Arab Spring seems to ebb, when nations and societies disintegrate by brutal civil wars and military oppression, the series of revolutions might seem like Dante s circles of hell. To counter this counter-revolution, Weizman proposes that the immanent power of the people at the roundabouts will need to find its corollary in sustained work at round tables the ongoing formation of political movements able to enact political change.

The sixth volume of the Critical Spatial Practice series stems from Eyal Weizman s contribution to the Gwangju Folly II in 2013, an exhibition curated by Nikolaus Hirsch with Philipp Misselwitz and Eui Young Chun for the Gwangju Biennale. Weizman and the architect Samaneh Moafi constructed a folly composed of seven roundabouts and a round table in front of the Gwangju train station, one of the central points in the events of May 1980.