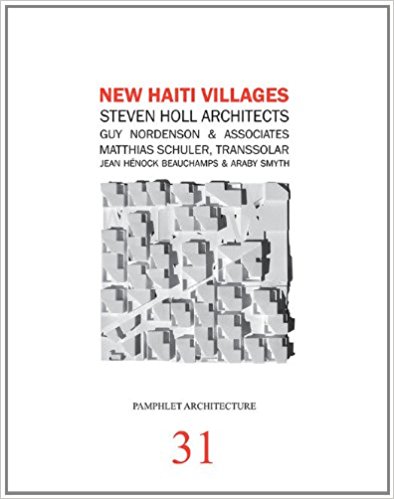 This project has been generously supported by Capital Partners.

After the devastating earthquake in Haiti, on January 12, 2010, Steven Holl had the idea of devoting the next Pamphlet Architecture book to solutions for rebuilding the architecture and infrastructure of the country. Going back to the origins of the series, which was founded by Holl in 1977, Pamphlet Architecture 31: New Haiti Villages presents Steven Holl Architects' vision for a new way of building in Haiti, with contributions from leading structural engineer Guy Nordenson and Matthias Schuler of climate engineering firm Transsolar.

To avoid making architecture that would just repeat the problems of the past, Holl asked the following questions to guide his design:
1. How should Haiti rebuild?
2. If the political corruption before the earthquake was problematic, what now?
3. Can urban/architectural expression be by Haitians?
4. Will outside engineers build pragmatic strongboxes?
5. Can the poetry of Haitis wind and sea, its colors and vegetation, its sky, guide planners and architects?

Holl attempts to answer these questions with his idea for "Dense-Pack Villages," a type of courtyard housing that could be built with recycled concrete from fallen buildings and steel and would be hurricane- and earthquake-resistant. Each "village" could house approximately 200 occupants, and the courtyards would be filled with greenery and fruit trees. Holl proposes that these houses use solar cells on their roofs to provide electricity, allowing the villages to potentially operate off the grid. Water can be supplied from desalinization plants in each village, and also from new reservoirs, replacing the outdated reservoirs that were destroyed in the earthquake.

The architectural ideas present in sketches, scaled drawings, and models are given more definite form with scientific analysis and advice from engineers Nordenson and Schuler. Nordenson, with his colleage Rebecca Nixon, advises on how to improve the durability and safety of new buildings in Haiti through improved construction and structural engineering techniques. Schuler gives numbers and dimensions to the plans to use solar power, water desalinization, and gray-water recycling in the Dense-Pack Villages.